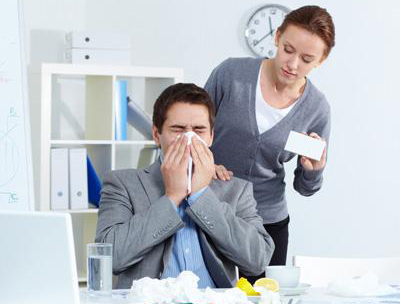 With more of us working hourly positions – or trying to stay caught up on our work if we have a salaried position – it's more common than ever to still go to work, the store or other public places when we are sick…even when we might have the flu.

But what may seem like a necessity to us is, at best, a nuisance for others around us who are well and wanting to avoid getting sick.

Good news, then, that there’s some common sense etiquette we can follow, and encourage others to do, when sickness strikes but we still have to be out and about.

Dr. Susan Rehm, medical director of the National Foundation for Infectious Diseases (NFID) and Anna Post, co-author of Emily Post’s Etiquette book, are working together to help people recognize when they may be seriously ill, and what to do to lessen the chances of others becoming sick because of them.

The NFID reports that germs can travel up to six feet in the air after a cough or sneeze and live for up to two hours on hard surfaces. Knowing that, Post recommends:

“Even if you wanted to go out to a lovely dinner party; it used to be considered rude to cancel on that hostess,” Post said.

Nowadays, any hostess worth knowing is going to say, ‘Yes, please do stay home and get well.’ If your spouse is healthy, encourage him or her to attend alone.” Post adds that if you’re diagnosed with the flu after spending a night out with friends, be sure to let the hostess know. There’s a chance you were contagious before you felt sick.

Post says the key to confronting someone who is obviously sick and spreading germs is to take a compassionate approach.

“What you want to do is show some care or concern in your voice instead of that note of disgust,” she says. “You can say, ‘You’re not looking so well. I’m worried it might be the flu. I think you should go home and maybe see a doctor’.”

When it comes to the flu, Rehm says fewer than half of Americans get vaccinated each year, even though the Centers for Disease Control recommends that everyone six months of age or older get a vaccine. Even worse is that when they are sick, even with the flu, they still tend to go about their regular routine. “Nearly two thirds of the people in our recent survey said if they have influenza they were going to continue on.”

Rehm says the handy acronym FACTS can help you know the difference between a common cold and the flu, which will have:

“The flu starts suddenly; colds usually come on quite gradually,” Rehm said. “If you feel that sudden onset on symptoms, and it might be muscle aches or headache or extreme fatigue, really think about taking yourself out of the workplace, out of school or whatever you’re doing, calling your doctor, and then heading home to help start getting better.”

Influenza is still a serious illness that Rehm says kills between 4,000 and 40,000 people and hospitalizes another 200,000 people a year. It shouldn’t be taken lightly, even if you’re worried that leaving work could be a problem.

“If you begin to feel flu symptoms at work, let your boss know right away that you need to go home and visit the doctor,” Post said. “Even if you feel well enough to go into the office, it’s better to work remotely than to spread the flu and get others sick.”

The old adage that its “better to be safe than sorry” certainly holds true when you’re sick. Be considerate to others and take care of yourself.