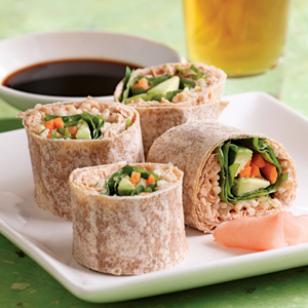 These tuna wraps were inspired by spicy tuna sushi rolls. We love how they taste with peppery watercress, but other greens, such as arugula, romaine, escarole or even radish sprouts, would taste great in the filling. If you want to play on the sushi inspiration, stir some wasabi into the soy sauce for dipping and serve with pickled ginger. Serve with sliced cucumbers and slivered red onions tossed with rice vinegar, a little oil and a pinch of salt.

Tips & Notes: Notes: Chunk light tuna, like all fish and shellfish, contains some mercury. According to the FDA and EPA, women who are or might become pregnant, nursing mothers and young children should limit their consumption to 12 ounces a week of fish with lower mercury, including canned “light” tuna. Consumption of albacore tuna (which is labeled “white”) should be limited to no more than 6 ounces a week. And, if you’re looking for an environmentally sustainable canned tuna option, check the label—tuna that was caught by troll or pole-and-line is considered the best choice, according to Monterey Bay Aquarium’s Seafood Watch Program. Or look for the blue Certified Sustainable Seafood label from the Marine Stewardship Council. Sriracha, a Thai chile sauce, can be found in the Asian section of many large supermarkets and at Asian markets. Tip: To cook brown rice, bring 2 cups water and 1 cup brown rice to a boil in a small saucepan. Reduce heat to low, cover, and simmer at the lowest bubble until the water is absorbed and the rice is tender, about 40 minutes. Remove from the heat and let stand, covered, for 10 minutes. Makes about 2 cups. Or, to save time, prepare 2 cups instant brown rice according to package directions.