Medicare Part B Rates to Increase in 2017

Premiums for Medicare Part B will rise by a modest amount in 2017 for most retirees.

“With CMS’ announcement, you get a clearer picture of just how much you’ll pay each month for your health care coverage,” said Brian Hickey, vice president of Insuractive®. “While the Part A and Part B premiums set by the government are different from the premiums set by private insurers for your supplemental plans, now is an ideal time to review both together to see if there are ways to save.”

Private insurers can raise premiums and change the benefits in your supplemental plans, including which drugs are covered. That’s why reviewing your plans during open enrollment is important, Hickey said.

“Even though the Part B premium increase is modest for most beneficiaries, it is the first increase in four years for many Medicare beneficiaries. So if your Med Supp or Medicare Advantage and Part D prescription plans’ premiums go up, it could be a double whammy,” Hickey said. “Review your plans so you’re not surprised, but also so you can explore areas for potential savings and to make sure your coverage still is what you need.”

Because the cost-of-living adjustment (COLA) for Social Security benefits will be 0.3% for 2017, a statutory “hold harmless” provision designed to protect seniors, will largely prevent Part B premiums from increasing for a majority of beneficiaries.

The remaining 30 percent will pay $134, a 10% increase from the 2016 premium of $121.80. (This includes beneficiaries who do not receive Social Security benefits, those who enroll in Part B for the first time in 2017, those who are directly billed for their Part B premium, those who are dually eligible for Medicaid and have their premium paid by state Medicaid agencies, and those who pay an income-related premium.)

Most people don’t pay a Part A premium because they paid Medicare taxes while working. For the few who do pay a premium, it will be $413 a month in 2017.

The Part A deductibles and coinsurance you pay for both hospital and skilled nursing facility stays will increase in 2017. Refer to the chart below to see the 2017 amounts compared to 2016.

Remember, if you have a Medicare Supplement health insurance plan, most if not all of the charges listed in the chart below are covered by the plan, but it does depend on what plan you have. 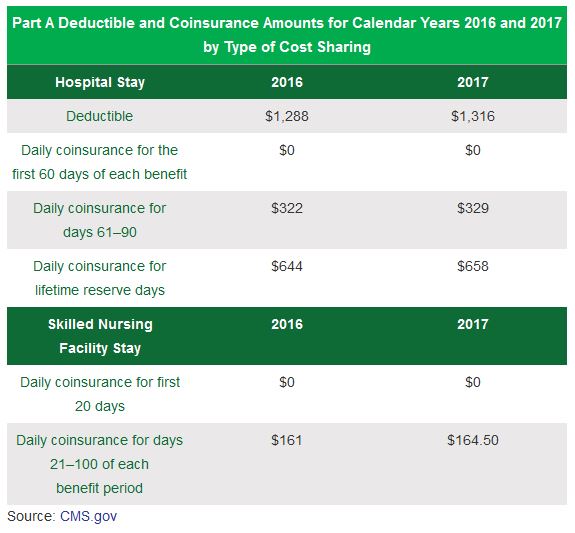