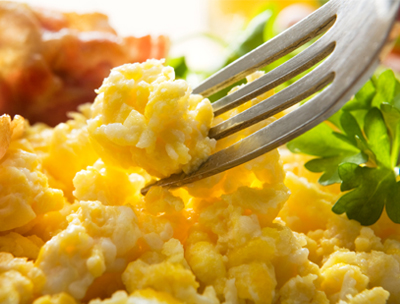 Recent studies appear to confirm the assumption that as we age there is a tendency to gain about one pound a year unless we watch what we eat and participate in some type of exercise program.

Nutritionist Chrissy Barth, owner of Live Breathe Nutrition in Phoenix, AZ, says aging does play a factor because a person’s metabolism starts slowing down around age 40, making it easier to gain weight as the body begins losing muscle mass.

“However,” she says, “I believe people can prevent gaining the typical ten pounds a decade by living a healthy lifestyle that includes eating a balanced diet, being active and moving every day, managing stress, having a positive outlook on life and getting adequate and quality sleep.”

That brings us to the second question: Should that healthy diet include eggs or are they taboo?

Barth says the notion that eggs are bad for you is a myth. “Moderation is the key,” she says. “If high cholesterol is a problem, then a person should only eat three to four eggs a week, but otherwise they can eat up to seven a week.”

She says eggs offer a lot of vitamins, minerals and about seven grams of protein. In addition, the nutrients in eggs can play a role in weight management, muscle strength, healthy pregnancy, brain function and eye health.

Eggs get a bad rap, Barth says, because of the amount of cholesterol in the yolk, but she says the real problem is not the cholesterol found in our diets, but rather the saturated fat content. Eggs are actually very low in saturated fat and high in “the good” unsaturated fat.