Insurance Solutions for an Aging America

Exploring Medicare’s Past, Present and Future

Who better to offer wisdom on the Past, Present and Future of Medicare than the owner and CEO of SMS himself, Milton M. Kleinberg?

Milt has been selling in the senior market since the 60s, and he’s spent the last three decades building MHC into one of the premier Medicare marketing organizations in the country. Now he’s sharing his knowledge with you.

Download a PDF of Milt’s Medicare Booklet and learn about:

More about Milton's book: Exploring Medicare's Past, Present and Future 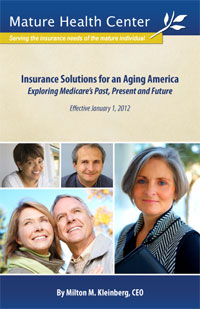 Kathleen Casey-Kirschling was born a second past the stroke of midnight on Jan. 1, 1946 in Philadelphia. The timing of her birth was significant because it made Kathy, as she prefers to be called, officially the nation’s first Baby Boomer, and often the unofficial symbol for her generation whenever it reaches an age-related milestone. So it went in October 2007, when Kathy became the first Baby Boomer to file for Social Security, applying online for early benefits at age 62.

It happened again in October 2010, when Kathy became the first Boomer eligible for Medicare, kicking off a two-decade span in which nearly 80 million Americans will begin relying primarily on the government for their health care. Compare that to the 47 million seniors drawing Medicare benefits today, and it’s easy to see that the “Elder Boom”, as some have called it, poses both a daunting challenge and an exciting opportunity for those in the insurance industry, particularly those who specialize in the senior market.

What follows in this booklet is in large part a retrospective of the Medicare, Medicaid and Social Security programs long and varied history, aimed at helping readers better understand the complexities of the senior health market and the nuts and bolts of the various Medicare-related products that are now available, including Medciare Supplement, Medicare Advantage and Medicare Part D.